For this month of July we have selected 5 unmissable contemporary art masterpieces, street art and pop art works of extraordinary charm and importance. 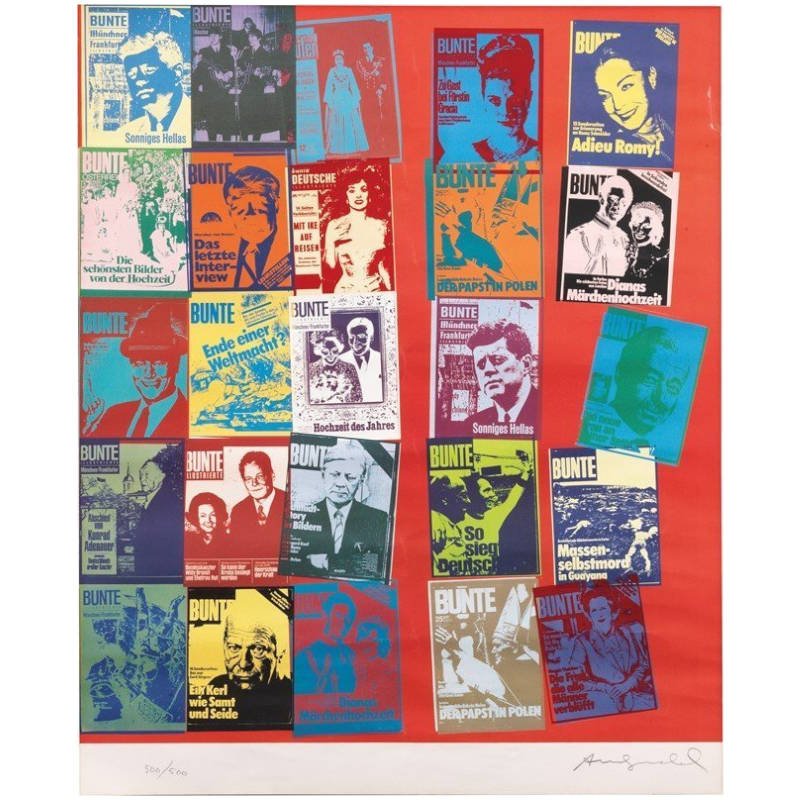 Among the most desired and prestigious works of art, this screenprint by Andy Warhol, signed and numbered in pencil in original, arouses increasing interest. This Andy Warhol’s work for sale is published in the general catalog of Andy Warhol’s graphic works “Feldman & Schellmann” at number II.304A.

Titled “Magazine and History” and created on the occasion of the inauguration of the new offices of Bunte magazine in Munich, it depicts 25 Bunte covers in a different color, which act as single tiles that form a different type of multicolored mosaic.

The Andy Warhol screenprint for sale is numbered on the bottom left of 500 copies worldwide and bears the stamp “The Estate Of Andy Warhol” on the back.

Fascinating and prestigious work of art by JISBAR, museum size and quality.

A work in which it is possible to find all the key elements of Jisbar’s art and depicting a very important subject, which we talked about in another previous article (see HERE). 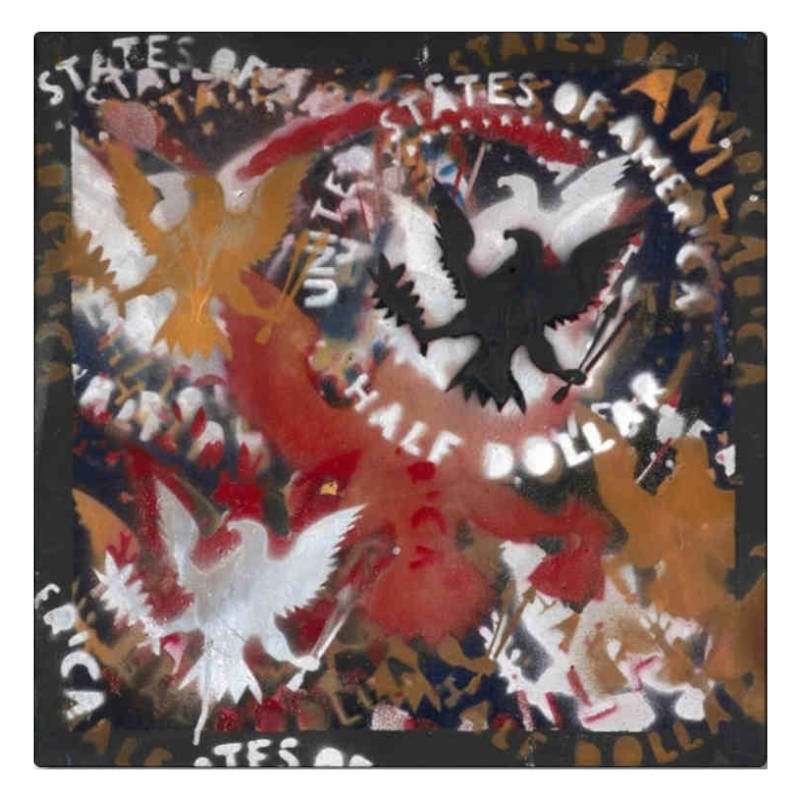 Franco Angeli work of art depicting the half dollar, one of the most prestigious and famous subjects of the Roman pop artist.

Why does Franco Angeli use a powerful American symbol in his works of art?

On the surface it might seem that the artist, in the spasmodic representation of the half dollar, intended to exalt American power, but the truth is the exact opposite because Angeli’s critique of American culture is evident in one of his first Half Dollars. An X is superimposed on the American icon, making explicit the message of repudiation and removal from that symbol, from the culture of the dollar, from commodification and from everything that is made in the USA.

This canvas by Franco Angeli contains the very history of the Roman artist. The half dollar symbol is repeated several times and in different shades of color, creating a harmonious and fascinating composition. 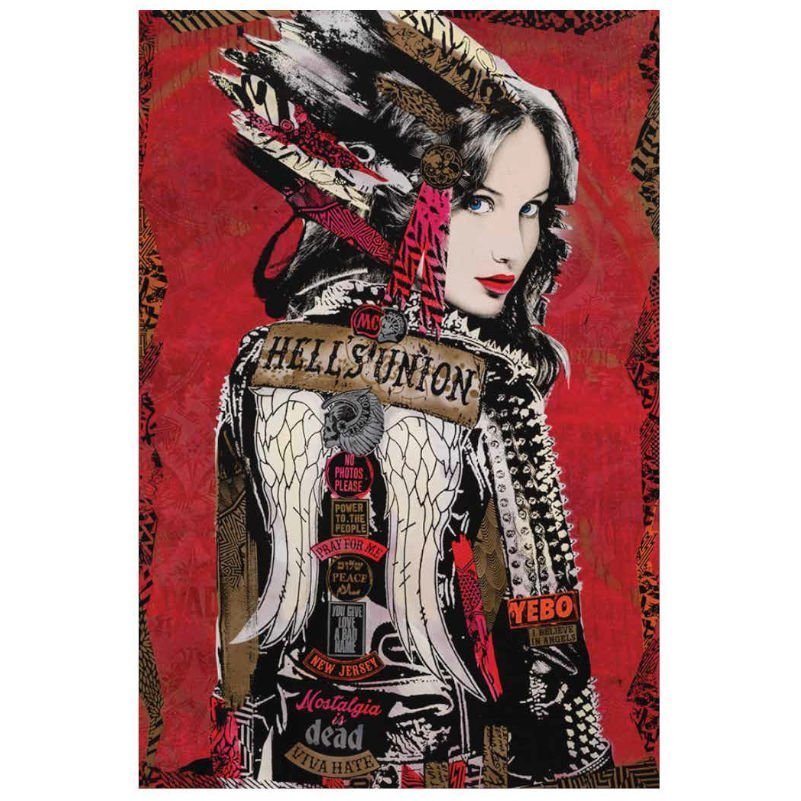 PREFAB77’s passion for portraiture and the female form is clearly visible in this wonderful canvas, made with mixed media and particularly bright colors. The protagonist is the woman who, with a magnetic gaze, dominates the composition and releases an intense emotional charge. 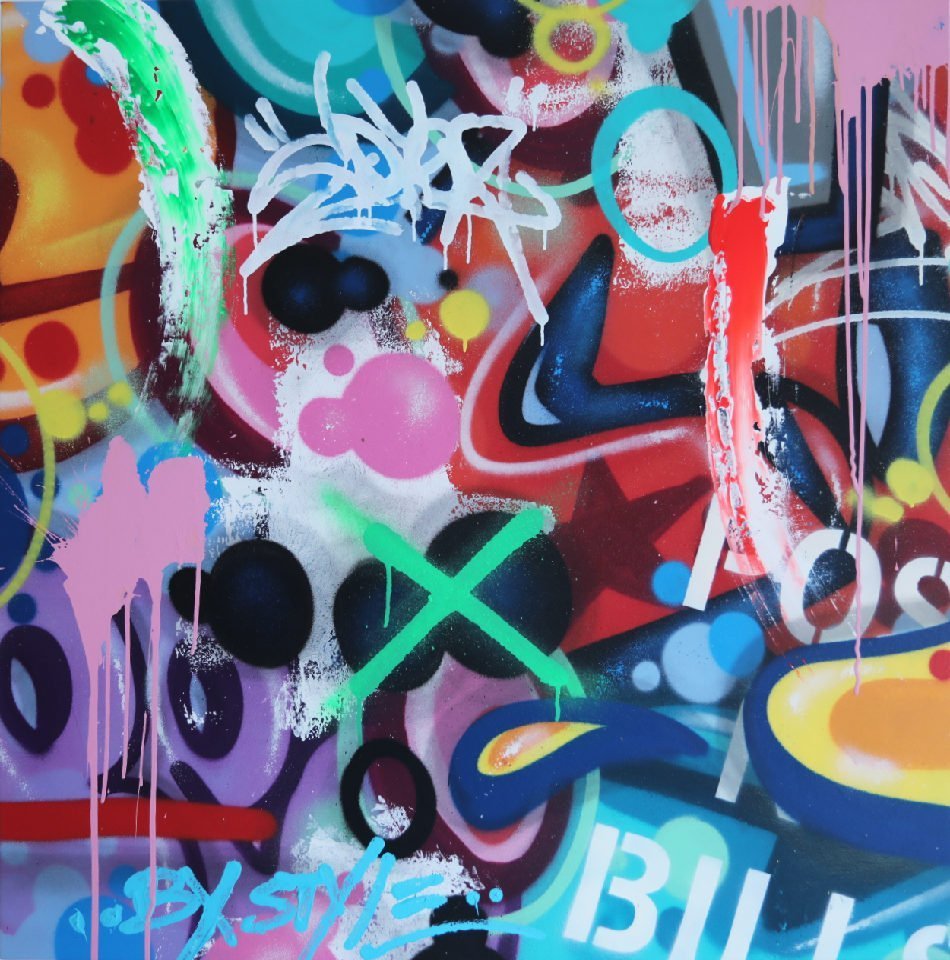 Fernando Carlo a.k.a COPE2 is one of the world stars of the street art movement. Some call him the “graffiti legend“, COPE2 was very active in the 80s-90s, during which he created dozens of graffiti in all the New York subway lines, thus gaining great visibility and building its image over the years. The character has attracted the attention of big brands such as Time Life, Converse, Adidas or Footlocker from which historical and profitable collaborations were born. Among the most appreciated and followed street artists in the world, COPE2 continues his artistic career by legally painting on the streets and collaborating with other great artists such as Shepard Fairey, Retna, Kenny Scharf, etc. Restless and controversial personality, there are many events that concern him. Wikipedia itself describes his artistic career, the legal events and the most famous controversies.

The COPE2 artwork shown above, of very high quality and generous dimensions, is made with mixed techniques on canvas and contains years of work and experimentation by the American street artist.