Like other works by Bansky, the work draws on religious iconography, in particular on the subject of the Madonna and Child typical of Renaissance painting. The artist’s intent, as we can imagine, is to address a fierce criticism of the effects of religion on the individual and on the masses, as well as obviously to reflect on the “toxicity” of the mother/child relationship that characterizes above all the Western world.

The screen printing, in Banksy’s characteristic stencil style, shows, in fact, a woman wrapped in large draperies nursing her newborn son. However, unlike the classic image, here the Virgin breastfeeds her baby not at the breast or, as we might think, with a normal bottle, but with a bottle marked with the symbol of poison, the skull with crossbones.

The many admirers of the artist will not be able to help but notice that this work presents not only similarities, but also differences from the usual style of Banksy. The sharp and clean lines executed in pencil, which correspond to the profile of the Child and the Virgin, are, in fact, interrupted by vertical lines almost as if they were dripping paint.

Almost similar style and subject were then taken up again in 2004 by the English artist for the creation of “Christ With Shopping Bags”. Here the polemical intent is obviously aimed at consumer society and its work of distorting Christian values. 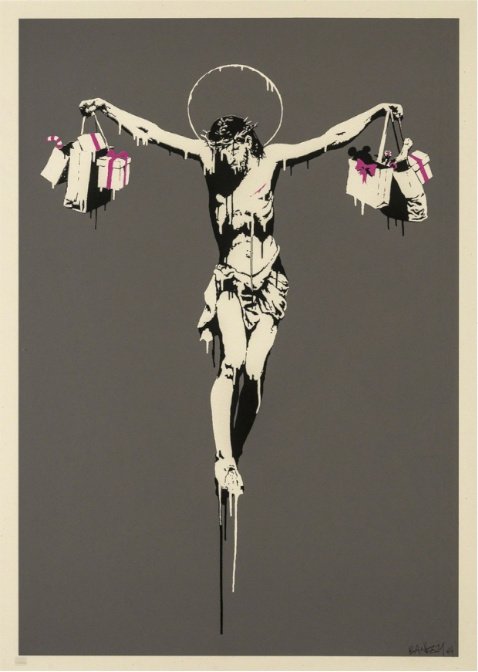 Banksy “Christ With Shopping Bags” – Screenprint in colours – edition of 82

However, the detail that most strikes and attracts the viewer’s attention in “Toxic Mary” is precisely the yellow ocher color of the toxic bottle, contrasted with the black and white of the rest of the work. What you get is a rather gloomy image, which evokes despair and despair, feelings also accentuated by the impression that the baby is slowly dissolving in the mother’s arms.

The work portrays a mother nursing a baby. We know, from the title, that the woman depicted is the Virgin Mary. In some respects, the image does not differ much from the classic iconography of the Virgin and Child, also given the positions of the body of the two figures that take on a triangular shape to give depth. 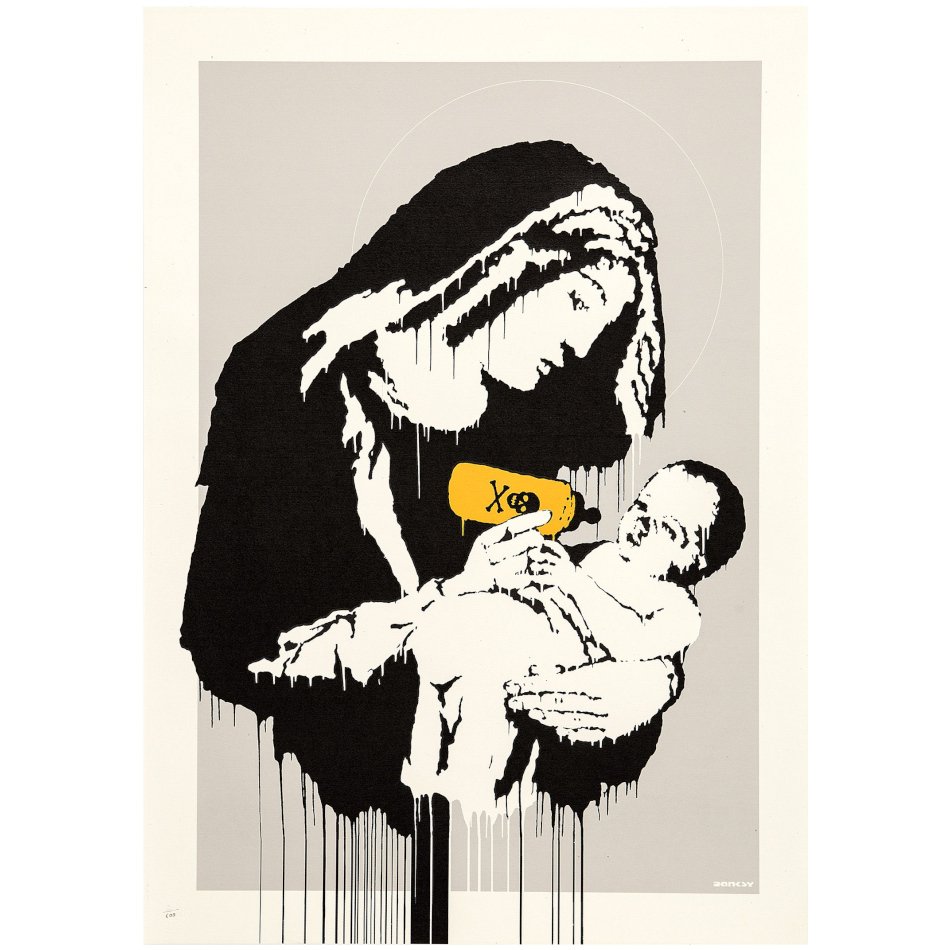 However, what differentiates this print by the Bristol artist from the Renaissance works of Raphael, Da Vinci and Michelangelo is certainly the polemical intent: the idea of ​​the Virgin Mary feeding the Infant Jesus with poison immediately appeared offensive and blasphemous. , precisely because it touches two of the purest and most innocent symbols of the Christian faith.

In truth, however, if we think about it well, even with this work, as in the Christ we have just seen, Bansky does not intend to criticize religion in the strict sense, when it comes to the society that creates toxic family relationships.

The connection with the religious theme is given, if anything, from the fact that very often confused and wrong ideas and values ​​are transmitted from parents to children, thus perpetrating prejudices, intolerance and inequalities. Therefore, these ideas, and not religion itself, would be the content of the bottle that the mother administers to her child, transforming a gesture of love into a gesture of hatred and violence. We also know that Bansky has repeatedly lashed out against the ethics of pharmaceutical companies and some of these also produce infant formula.

In some respects, the controversial content of another of Banksy’s works depicting the Madonna is different: it is the “Madonna with the gun” and this time it is not a drawing but a mural, created in the historic center of Naples. Here the Virgin has her eyes raised to heaven as a sign of Christian piety and affliction, only that on her head there is not a halo as we usually see, but a gun. The reference to the link often denounced also by the media between organized crime and religion is therefore evident. 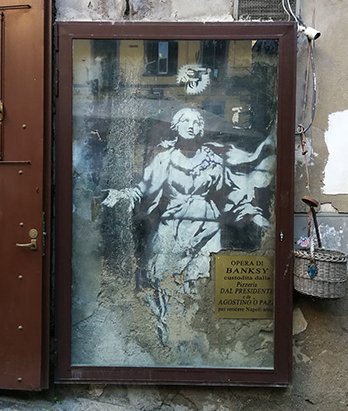 The first “Toxic Mary” appeared in Banksy’s exhibition entitled Turf War of 2003. The exhibition, which included the artist’s paintings, sculptures and installations, was closed by the London police a few days after the inauguration. Here the famous painting was presented with two mirrored images of the Madonna and Child on the right and left and above rifle sights.

Subsequently, the work was presented by BANKSY with 150 signed prints and 600 other limited edition unsigned graphics. You can also find trial versions of the artist with pink and blue colors in the background.

The highest price paid for a Virgin Mary print was around £ 120,000 for a pink artist’s proof, auctioned at Sotheby’s in March 2021. Other unsigned Toxic Mary screenprints were sold even higher than £ 71,000.