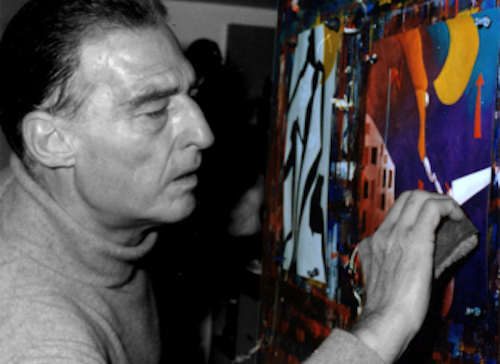 Emilio Tadini (Milan 1927-2002) was an Italian painter and writer, inspired by Surrealism and English Pop Art.

Since the end of the 1950s, he has added the work of painting to critical and literary work. His first personal exhibition was in 1961 at the Galleria del Cavallino in Venice. From the very beginning, Tadini developed his painting in large cycles, building the picture according to a technique of superimposition of temporal planes in which memory and reality, tragic and comic, continuously play against each other.

His pictorial work develops in several cycles. Emilio Tadini lets himself be influenced by English Pop Art, by the painting of De Chirico and Picasso and develops an increasingly refined language, original of dreamlike figuration.

He holds personal exhibitions abroad, Paris, Stockholm, Brussels, London, Antwerp, the United States and South America, both in galleries and in public spaces and museums. It is also present in numerous group exhibitions. In 1978 and 1982 Emilio Tadini was invited to the Venice Biennale. In 1986 he held a large exhibition at the Rotonda della Besana in Milan where he exhibited a series of paintings that herald the cycle of Refugees and that dedicated to Italian cities, then presented in 1988 at the Tour Fromage in Aosta. In 1990 he exhibited seven large triptychs at Studio Marconi. In 1992, the Oltremare exhibition at the Galerie du Center in Paris and in 1993 inaugurates an exhibition with new works at Studio Marconi in Milan.

In 2001 the city of Milan in honor of Emilio Tadini organized an anthology exhibition at the Royal Palace, with artworks from 1959 to 2000.

Emilio Tadini: original artworks for sale made with a screen printing technique on rigid paper.

The artworks of Emilio Tadini shown below are all signed and numbered by the artist, authentic paintings with updated prices and quotations.