“Beauty, grace, popular, Roman, direct emanation of life, autobiographical appendix and at the same time ‘other’ that transcends it, self-portrait and epochal portrait in perfect synergy of references”: thus described the painting of Franco Angeli, the poet, writer and journalist Goffredo Parise, one who certainly knew a lot about art and artists, having known and frequented many personally.

Indeed, what we know about this reckless and rebellious Roman pop artist, known for his stormy and tormented character, we deduce more from the facts narrated by people who knew him well, such as the beautiful Marina Ripa di Meana with whom he had a long and complicated relationship in the years in which, together with other “cursed artists” such as Tano Festa and Mario Schifano, he gave life to the artistic group called “Scuola di Piazza del Popolo”.

Born in Rome, in the San Lorenzo district, on May 14, 1935, Franco Angeli starts working very early to be able to assist his single and sick mother. The materials he finds (upholsterer, coachbuilder) put him in contact with real life, the sufferings of the people and of course the “matter” such as fabrics and pieces of sheet metal, which will often be present in his works of art.
The discovery of painting represents a catharsis for him: << When a person has a profound malaise – he will say in one of the interviews – he must look for a way to no longer be alone, he must ultimately find an interest that accompanies him for life >>.
His first approaches to the artistic experience at the atelier of the sculptor Edgardo Mannucci, a friend of Alberto Burri, take place in the mid-1950s, years in which he had openly approached the Communist Party, from which he later left for get closer to extra-parliamentary movements.
His interest in the real world and the critique of “blood” and the violence of war, one of the central themes of Angeli’s rebel art, is evident since his participation, in 1962, in the New Perspectives of Italian Painting at the Gallery Comunale d’Arte Moderna di Bologna, where it presents works of art in which the symbols of politics appear (swastikas, crosses, eagles, sickles and crescents) covered by a veil, as if to reduce their violent impact on society.

These positions will later lead him to take sides “naturally” against the Vietnam War, in 1968, as evidenced by the works “American University” (1967) and “Corteo” (1968).
A recent exhibition at the Credito Valtellinese Group Galleries, entitled “Rebel art. 1968-1978 Artists and groups from 1968 ”, saw the works of Franco Angeli as protagonists, together with those of other“ pacifist ”artists such as Vincenzo Agnetti, Fernando De Filippi, Nanni Balestrini, Fabio Mauri, Mario Schifano and Franco Vaccari. For the organizers of the event, this exhibition wanted to represent an attempt to investigate, more than 50 years after the symbolic date of ’68, about the influences between art and the ferments of political protest and revolutionary hope then present in student groups and, in general, in Italian society and politics.

However, Franco Angeli’s “rebellious painting” also feeds on other suggestions as well as that of political and social criticism. The ruins, the tombstones, the obelisks and the statues of Roman eagles and wolves covered with veils or the hammers and sickles, the obsessively repeated flags or swastikas naturally also tell the link with the city to which it owes its birth, Rome.

Some critics also suggest to see in the use of hearts, moons and stars and, later on, of playful airplanes that cut the sky in two, as well as a testimony of his travels in the East, also references to his childhood stolen due to war and early entry into the world of work. 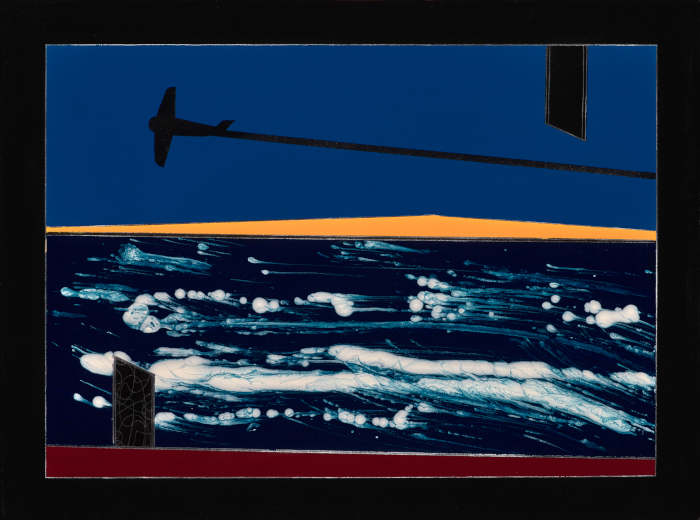 Unlike futurist aeropainting, of which the first example is Marinetti’s writing “The Pope’s airplane” (1908), in which the plane becomes the symbol of denied freedom, thus expressing the desire to fly, for Franco Angeli the airplane is certainly traced back to the negative experience of war.
On July 19, 1943, while still a child, he had personally experienced the trauma of the bombing of San Lorenzo by the US Air Force, so much so that he made it the main object of his first paintings. In 1968, however, he personally took sides against the sending of napalm bombs by American planes over Viet Nam. It is therefore no coincidence that the theme of war recurs in Franco Angeli’s works of art even in the last years of his artistic production and his life, which ended early on November 12, 1988 at the age of 53. 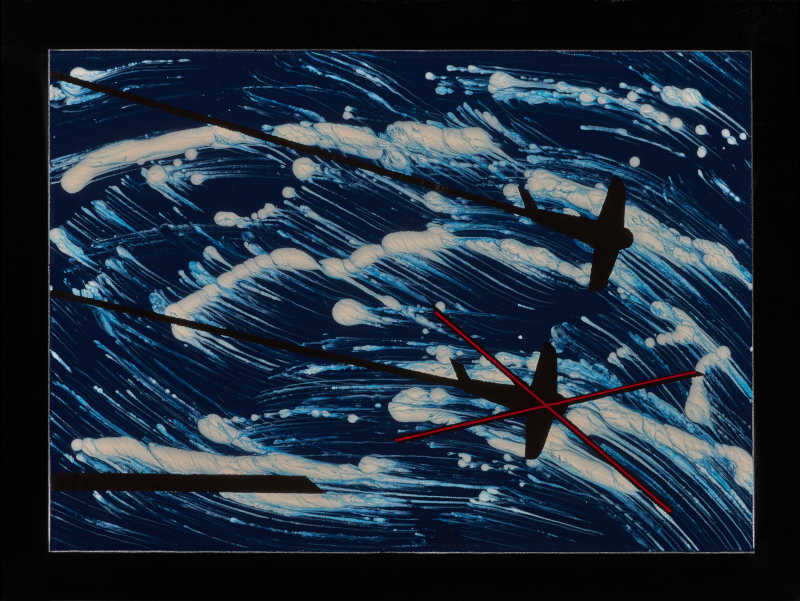 In one of his notebooks Franco Angeli writes that “we must love everything that has happened, but also its opposite“. An invitation that is not very difficult to understand, which highlights even more how the Angeli’ rebellion is not a sign of rupture, but is actually the artist’s attempt to reconcile with life. Franco Angeli artworks, especially those dedicated to violence and war, are therefore also the expression of the firm will not to give up, transforming themselves into a message of peace and hope that goes beyond the clamor of the processions and the pacifist craving typical of early 70s.

The strength of every painting by the Roman artist lies precisely in the authenticity and expressive urgency with which this message comes out: in the works of art by Franco Angeli we find not only undisputed masterpieces of Italian contemporary art but, also and above all, we find the experience and sensitivity of the individual artist that converge in defining the portrait of an era.