Street Art was born in New York in the 70s, a period in which the economic and social crisis fueled dissent and crime. In response to this chaos, some young people, many of them of Latin American and African American descent, mostly living in the working-class neighborhoods of Washington Heights, Bronx and Brooklyn, spontaneously began to spray paint the wagons, walls and rails of some subway lines.

Thus was born the Art of Graffiti, later renamed as “Street Art“, a form of artistic expression initially pursued as illegal and unauthorized, but which later found its way into art galleries and museums. And even if it is still debated today whether graffiti and murals are works of art or acts of vandalism, so much so that the New York authorities continue to prosecute and severely punish those who practice them, it is undeniable that, just as happened other art forms, such as Pop Art, over the years we have witnessed the emergence of various “Styles” also linked to the personality of the most prolific Street Artists of the moment.

The first “graffiti artists“, for example, used to use an art name to hide their true identity, followed by a house number. Their main goal was, in effect, to see how many places they could “bomb” with their signature. This actually led to a real explosion of “Bubble Letters” throughout New York.
The next step was the adoption of spray paints that added frames, colored designs and logos to simple “tagging”. This style of graffiti, known as “Wild Style“, had the advantage of being quick and easy to create, thus allowing the author to hit quickly, thus reducing the risk of being discovered.
Later, from this original group of Street Artists, others broke away, which was often associated with a more savage style, such as that of the current called the “Kids Destroyer”, led by Cope2 (aka Fernando Carlo).

So let’s see below some of the most important names that we can trace back to the History of Street Art in New York, a real “open-air museum” of trends and styles for lovers of this form of art. 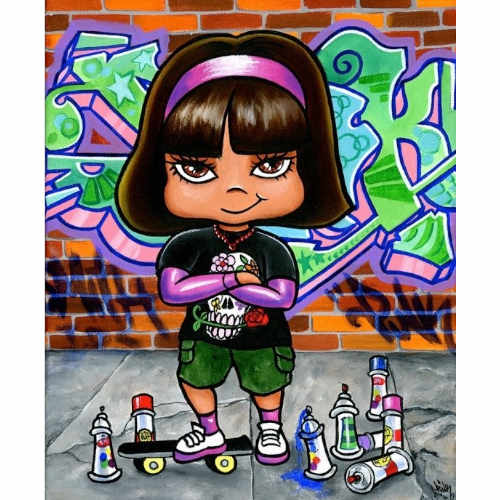 Although most of the early 1970s Street Artists were men, some women also began to circulate among them. Among these, one of the best known is Lady Pink (aka Sandra Fabara, born in Ecuador), recognized today as one of the greatest street artists in Queens.
Her source of inspiration, unlike other street artists of her time, was at first the urgency to express her pain for a love story that ended badly. This led her to “tag” the name of her beloved all over New York using a can of paint.
Later, his murals became among the most immediately recognizable artistic expressions in the New York graffiti genre, as they are characterized by rather playful images with the same graffiti as a background.

Lady Pink’s artworks are now exhibited in the world’s most important modern and contemporary art collections such as that of the MET in New York. 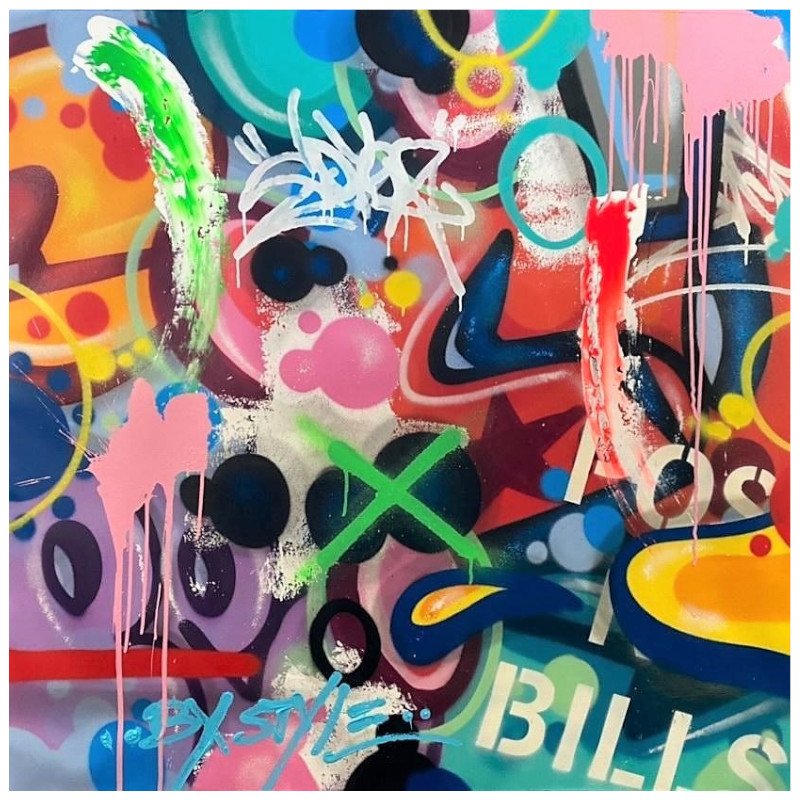 Fernando Carlo, a.k.a Cope2, is a legendary Bronx graffiti artist who has been on the street art scene for nearly four decades.

Cope2 graffiti production began in 1978, under the influence of his cousin Chris. Later, he created his group, the “Kids Destroyer”, renamed “King’s Destroyer”, with whom, like another contemporary street artist Blade and his team called TC5, “The Crazy 5”, he made graffiti in all New York subway lines.
Since then, Cope2 has begun to grind commercial successes, also obtaining commissioned jobs from clients such as Adidas, Footlocker and Converse.
Cope2’s paintings which are a reworking of the graffiti form in an abstract key are now exhibited in numerous exhibitions and art galleries around the world and his street art works have also become part of the virtual world with appearances in some known videogames.

Frank Shepard Fairey, a.k.a. “Obey“, is a contemporary American street artist, also founder of his own brand, “Obey Clothing”, which is inspired by the world of skateboarding and street graffiti. The brand is also known for incorporating social and political provocation into the images of its clothes.

But Obey also has a long experience as an illustrator, graphic designer and street artist, graffiti and mural author in New York and around the world. It all starts with a simple sticker depicting the face of wrestling wrestler André the Giant, which the artist created in 1989 while a student at the Rhode Island School of Design and scattered throughout the city.
Over time, Obey’s works of art have become one of the most distinctive artistic expressions in American and world street art. Examples are Barack Obama’s “Hope” graffiti portrait, which became the iconic image of the 2008 presidential campaign, but also “Libertè, Egalitè, Fraternitè”, “Obey Icon-Giant” and “Power & Equality”. 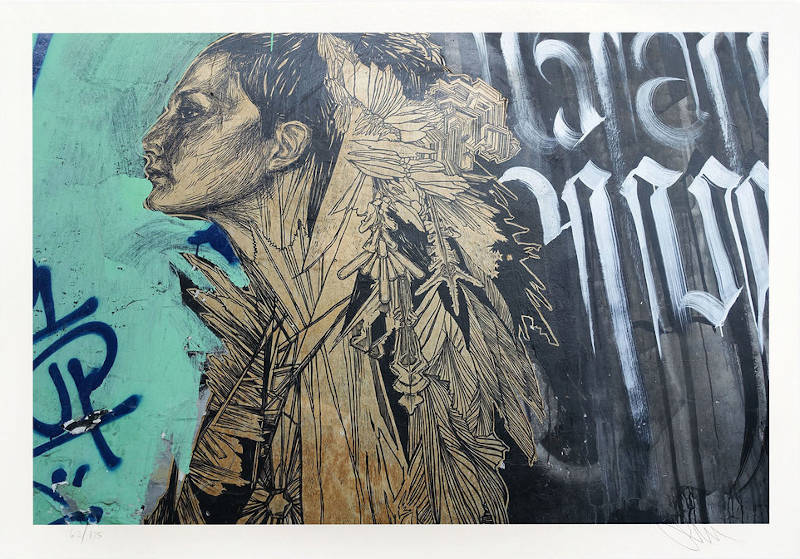 Caledonia Curry, better known under the name of Swoon, is another Brooklyn Street Artist who, thanks to the quality and intensity of the artistic message of her work, shows that women are no less than men in the field of figurative current of Street Art.
Her first street art works appeared on New York buildings in 1999, while she was still a student at the Pratt Institute of Art. It should be noted that in this period the “graffiti artists” are in full artistic evolution, undergoing contamination and influence of other artistic currents, such as comics. We are thus witnessing, on the one hand, the increasingly widespread use of stickers, posters and stencils together with the classic spray can, on the other hand in the search for new spaces in addition to railway trains in order to make the use of this type of vehicle even more democratic art.
Swoon’s works of art, today spread through murals or as works of art in permanent museums all over the world, are distinguished by the desire to transcend the most concrete reality, often showing in his graffiti and paintings subjects extracted from myths and fairy tales, very often belonging to the female world. 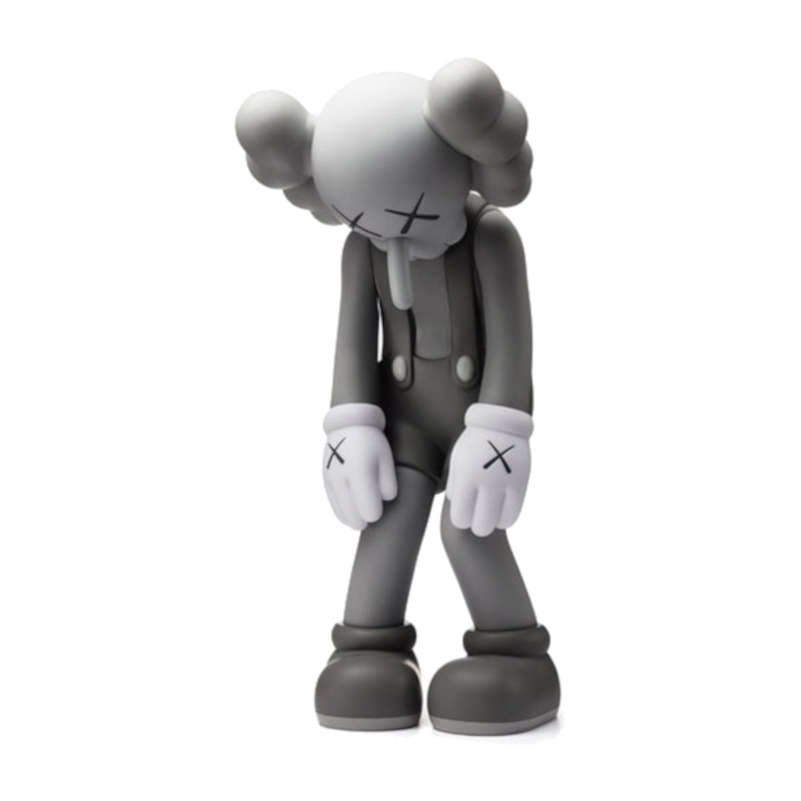 Brian Donnelly, known as Kaws, is a Brooklyn-born artist and designer known for creating acrylic paintings based on the repeated use of a cast of figurative characters and motifs, initially in 2D and later also in 3D.
In this case, these are real sculptures whose dimensions vary from a few centimeters to about 10 meters in height, made with various materials including fiberglass, aluminum, wood, bronze and steel.
But what not everyone knows is that Donnelly also started his work as a graffiti artist.
While still a student, he painted for example on the roof of a building near the school, St. Anthony High School, to be able to see it during class hours.
Moving to New York in the early 1990s, illegal graffiti was also his first experience in the world of art. Given that at that time the Mayor Giuliani had put in place a real Anti Graffiti task force, Kaws like the other “graffiti artists” carried out his work as an artist with the favor of the night, subverting billboards, telephone booths and bus shelters.

This list of Street Artists of course is neither exclusive or definitive, as there are many other extraordinary and legendary New York graffiti artists and Street Artists known and appreciated around the world.
However, our article still wants to be a reminder that can serve to understand how street art has evolved over time as a real form of artistic and expressive communication in which the message of each artist comes to life through the elaboration of a style and a thought that is always original and a source of new inspiration for others.