Mark Kostabi and the secret to become a successful artist

“Believe in yourself, have a story, get other people to work for you”. These are some of the suggestions that artist Mark Kostabi gives to young artists who want to make their dreams come true in an interview with the Artnet art blog a few years ago.

But who is Mark Kostabi and why is his advice so important? Mark Kostabi is an American painter and composer best known for his paintings of faceless mannequin-like figures, often set in surreal landscapes or scenes from the history of art.

His work explores a variety of themes, including suicide, love and the role of technology in the modern world. One of his most famous works is the painting “Use Your Illusion”, which was used for the cover of the Guns N ‘Roses album of the same name released in 1991.

Born November 27, 1960 in Los Angeles, California, to Estonian immigrants, he studied art at California State University in Fullerton before moving to New York in 1982. During the mid-1980s, Kostabi actively participated in the cultural scene of East Village, becoming famous for posting self-interviews. 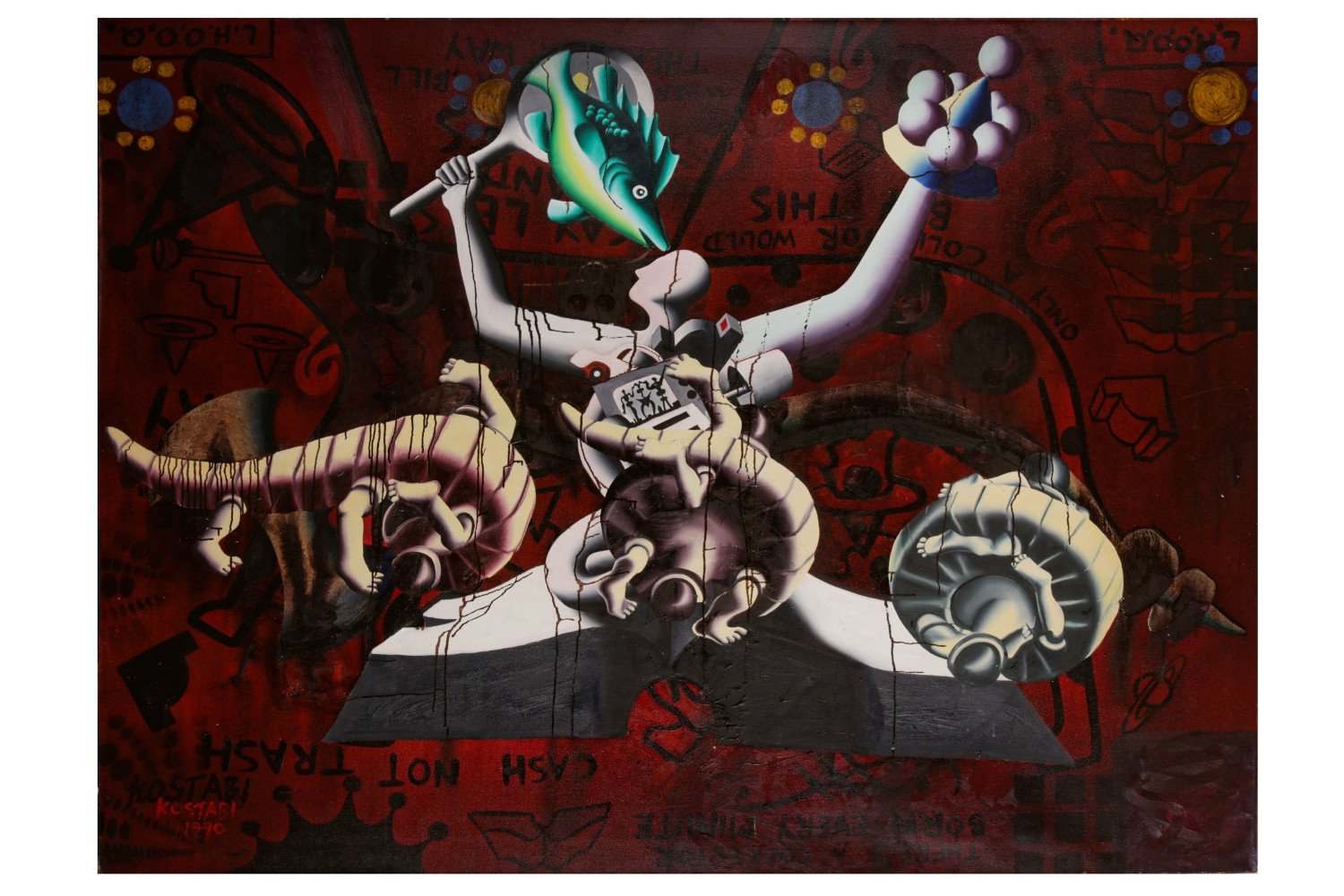 In 1988 he founded the Kostabi World, a studio where several assistants collaborate in the creation of his works, exactly on the scheme of the Renaissance workshops. Various models and techniques converge in his paintings, ranging from the influences of Italian Renaissance painting, to Surrealism and Andy Warhol’s Factory, all masterfully reworked in an unmistakable and unique style.

This mixture of genres, in which references to other works of his own and of other artists are not rare, make Kostabi’s art comparable to a sort of collective artistic archive of the unconscious, almost as if the labyrinthine repertoire of images coming from past and from our time had been collected by a single author, re-proposing it in a fragmented way with faceless and timeless characters. It is therefore impossible not to recognize his signature every time one of his paintings is seen.

Mark Kostabi’s works of art are exhibited in the best contemporary art museums in the world such as the Guggenheim in New York, the MoMA and the National Gallery of Modern Art in Rome. In Rome, and in Italy in general, this artist is very present today with his works, so much so that he has become one of the best known and most appreciated contemporary artists in our country.

But now let’s take a closer look at some of the characteristics of Kostabi’s works.

Why the characters in Kostabi’s works are faceless

This, of course, can be seen as a tribute to the main exponent of the artistic current of metaphysical painting, but also as a distance. The “mannequins” of this Californian artist express, in fact, a sensuality and an ability to love that were not present in metaphysical painting.

On another occasion, Mark Kostabi, who has also published several books and produced his own TV show, in answering the question “why do you paint faceless figures?” he replied that his intent is first of all to speak “a universal language without racial limitations” as well as to express the fear of society for individuality.

In essence, we can say that its goal is to give universality and immortality to its message, which is the common purpose of all art and artists in general.

In many of Kostabi’s paintings there is also a critique of modern society, in particular the use made of technology and new computer tools, a topic that is often touched upon in an ironic way. 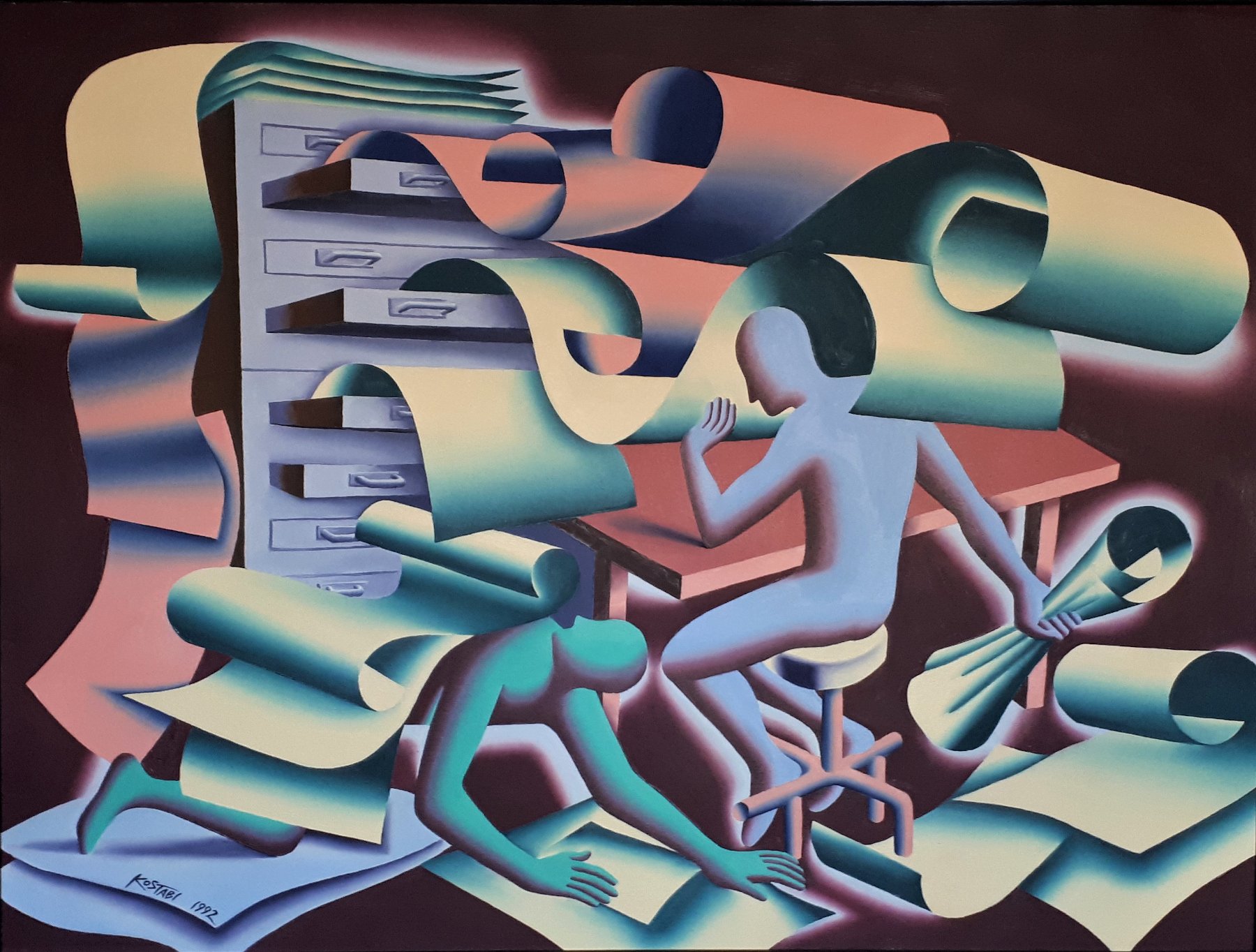 However, Kostabi himself is a great lover of technology, which he usually uses also for his work and in daily life, so very often the works that deal with this theme are seen more as a reproduction of what happens in reality, rather that like a fierce criticism.

Instead, what interests the artist in this case is to deal with the state of mind that people go through in relation to certain situations. In some of his paintings, it clearly emerges in the sense of loneliness and emptiness in which man lives in contemporary society. 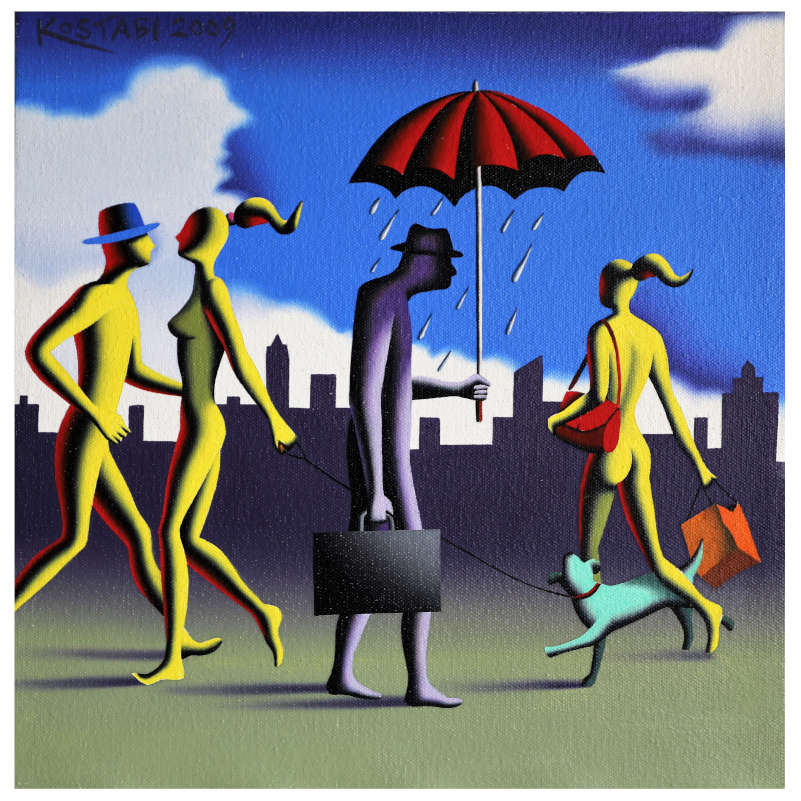 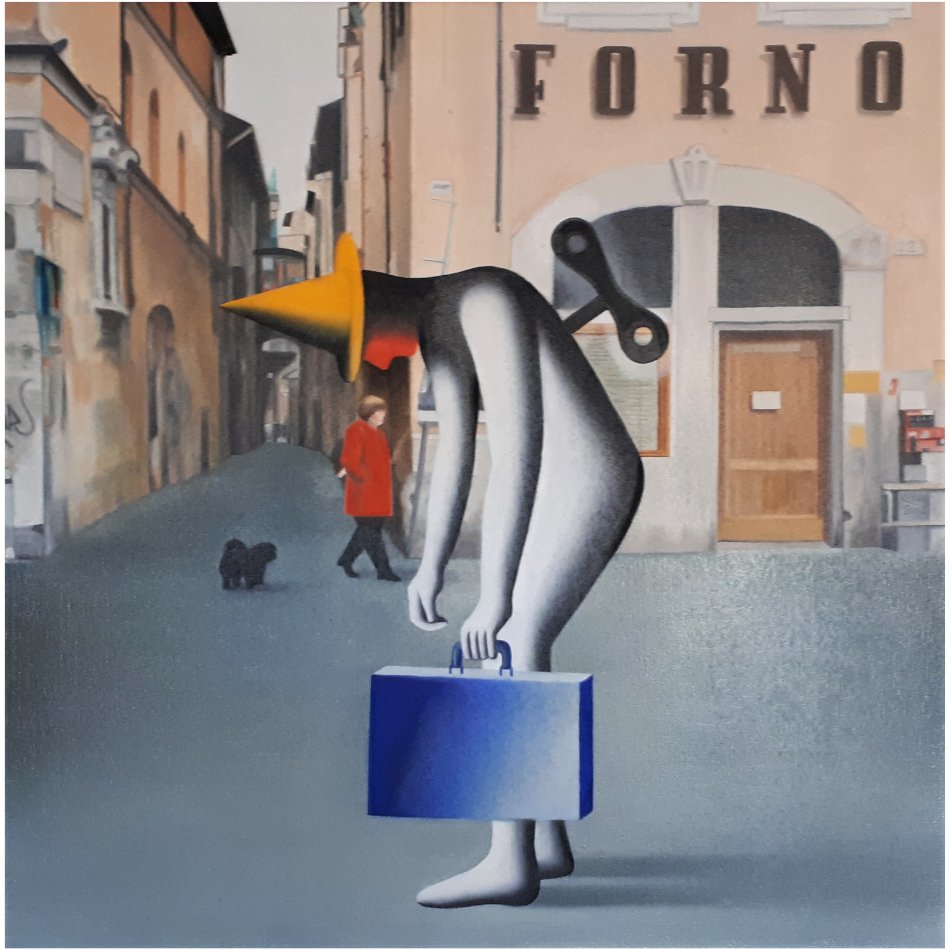 The condition of the artist in Kostabi’s works

Wanting to also return to the advice given to young artists by Kostabi that we mentioned at the beginning, we can say that not only those who want to realize their dream of being successful in art should follow them because this artist is today one of the most popular in the world, but also because he has investigated for a long time in his works of art and not only the link between the artist and the world.

In fact, in a recent statement he stated: “My goal has always been to create the most interesting art possible. My art should enrich the life of those who observe it, both of a visitor who looks at my paintings in a museum, and of a collector who looks at a Kostabi for a long time in his home, or of a group of students reflecting on one of the my murals, more and more numerous, made for a public service. My images bring joy, even if they tell stories of loneliness, confusion and isolation ”.

In our opinion, this approach is not only perfectly acceptable, but also best expresses what modern and contemporary art should be for us. A painting, a sculpture, a picture, beyond the meaning it may have for the artist, also represents a way to look out the window and see something that has first of all value for us.

Of course, it is important to decipher the authentic message contained in the artist’s brush, but at the same time it is even more important to see the meaning that reaches us of that same work, that enrichment Kostabi talks about in the previous quotation which is then the true purpose of each work of art. 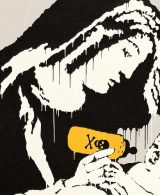 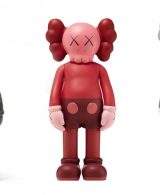