Cinema has influenced many artists all over the world, just think of the nine serigraphs depicting the face of Marilyn Monroe by Andy Warhol, however the contemporary artist of Calabrian origin Mimmo Rotella was one of the few to find in the Cinema his true “Muse Inspirational “.

Born in Catanzaro on 7 October 1928, Mimmo (Domenico) Rotella is today considered one of the most important exponents of international Pop Art. After the first artistic experiences in the avant-garde field, in which he created abstract works of art with geometric figures (Neo geometrica painting) inspired by the pictorial works of Kandinskij, Mondrian and Picasso, starting from the 1950s he arrived at his own original form of art, the “Collage”, later renamed with the name of “Décollage”.

Mimmo Rotella’s decollage are obtained by tearing advertising posters off the street (which is why he was given the label “poster thief“), then gluing them on the canvas, then tearing them back to shreds it was a real puzzle or collage. This is how the glossy faces of the great Hollywood stars such as Liz Taylor, Humprey Bogart and Ingrid Bergman become the protagonists of a new artistic expression that is influenced by Cubism, Abstractionism and Dadaism.

As will happen with Andy Warhol a few years later, Mimmo Rotella has managed, through his artworks, to transform some of the most famous actors of his time into icons, including, in addition to those already mentioned, also Marilyn Monroe, Sophia Loren, John Wayne and Clark Gable. 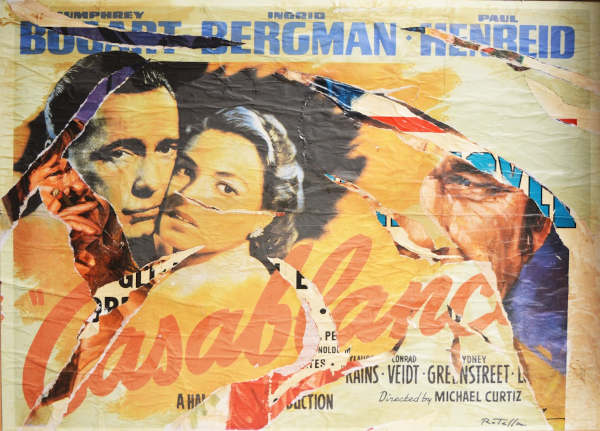 Mimmo Rotella artworks are not limited to single decollage on canvas, which however represent the artist’s most famous and representative production, as the latter, especially in the nineties, in addition to the posters takes away from the streets of Rome also pieces of sheet metal and recycled materials with which he creates assemblages (“assemblages”) and overpainting for his décollages of famous actors.
The use of a product (the poster) that is the result of mass communication typical of the modern age is undoubtedly the signal of a full adherence to the ideas of Pop Art. So also the same decollage by Mimmo Rotella, made with the gestural intervention on the canvas, through tearing of posters that certainly modify its original appearance according to a logic meticulously studied at the table to attribute a new and proper message. << Art itself is a message >> says Mimmo Rotella in numerous interviews released during his long career. 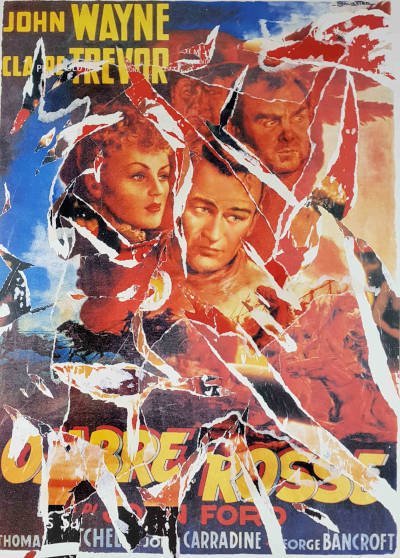 However, in Mimmo Rotella’s artworks it is impossible not to see also a desire to rebellion against a consumerist society based on the cult of images (anticipating, in some respects, some of the themes of the Cultural Revolution of ’68) and even Influence of the Abstractionism of the first paintings. The tears made by the artist on the posters are not, in fact, random, but to all intents and purposes imitate the inexorable action of time that erases and corrodes the material until it transforms a concrete image into an indecipherable and evanescent tale.

Rotella’s experimentation does not end here: at the beginning of the 60s he joined the Nouveau Réalisme, becoming one of its most important exponents; in 63 he created the first works of Mec-Art, photographic prints on canvas (in the 70s he expanded the technique by printing on plexigass supports as well); in the 1980s he created the “Blanks“, advertising posters hidden by monochrome sheets.

But passion for Cinema never leaves him. << Since I was a child, I ran away from home to go to see Chaplin’s silent films >> he writes in his autobiography and the first exhibition in Paris in ’62 dedicated to the posters of Hollywood actors who worked at Cinecittà in those years was. In 1984 he made acrylic canvases depicting the same artists he had previously immortalized in the décollages, while 1997 saw him engaged in the production of the “Felliniana” cycle named after the great master Federico Fellini, who in a 1974 interview had pointed out him as the the only artist capable of giving nobility to the film poster.
2005, a year before her death, sees Rotella engaged in an artistic project together with Alda Merini to celebrate together the “eternal beauty” of Marilyn Monroe: the verses of the poetess of the Navigli combined with some of the most famous décollage of Mimmo Rotella dedicated to the most charming and melancholy diva in Hollywood. The project, however, was not completed due to the sudden disappearance of both.

Love, that of Mimmo Rotella for the Cinema, which was reciprocated anyway. In 1960, in fact, he participated in a project by Enzo Nasso, a short film dedicated to the “Angry Painters”, of which he took care of the sound part (Rotella is in fact also the inventor of phonetic poetry, or as he defined “Epistaltica”, consisting of a flow of words, whistles, sounds and onomatopoeic noises without meaning). In 2004, however, the director Mimmo Calopresi shot a video documentary about him, “The hour of the lizard”, from the title of his autobiographical book. A long and interesting interview in which the artist from Catanzaro retraces his career from the beginning to the last few years. Even the emblematic title refers to a real-life episode of Rotella, who, when he was a boy, was unnecessarily warned by his mother not to go out during the hot and sunny summer afternoons in Catanzaro.

A love and a passion that continue even after his death, which took place in Milan on January 8, 2006: the Mimmo Rotella Foundation, commissioned by himself in 2000 and now followed by his family, has established an international film and artistic award that has seen as winners actors such as George Clooney, Al Pacino, Mel Gibson and directors such as Sorrentino, Amelio, Ferrara and Celestini. 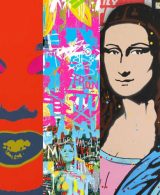 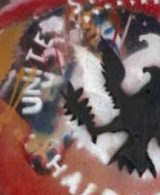