Although he himself liked to define himself as the photographer of “attractive people doing attractive things in attractive places”, there is much, much more in Slim Aarons’ photographs.

To understand the importance of his photographs, often aimed at immortalizing the life of great American celebrities, you need to know his personal biography.

Born and raised by his grandparents on a New Hampshire farm in 1934, at the age of 18, Aarons joined the Army while attending West Point Military Academy. His participation in the Second World War also earned him the award of a Purple Heart, a military decoration that the President of the United States recognized for those wounded or killed in service.

Thanks to the friendship of director Frank Capra, he was sent by Yank magazine to Europe to document the war effort with his Leica. Here, the young photojournalist immortalized bombings, sieges and field injuries. His is the cover with which his magazine appeared in the July 44 issue, just before the end of the Italian campaign: an American soldier hugging an Italian boy among the people while celebrating his liberation.

Returning, however, from the conflict, while the wounds sustained in the fight healed, those of the heart remained alive and bleeding. “After seeing a concentration camp you no longer want to see other horrible things” he declared in an interview. And again, with his proverbial irony and sagacity: “The war taught me that the only beach worth landing on is decorated with beautiful, semi-naked girls who tan under a calm sun”. It was then that George Allen Aarons, his full name, became Slim Aarons.

Success comes soon: one of his most famous photos, “Kings of Hollywood” (1957) was taken during his stay in California on New Year’s Day. It portrays, in black and white, Clark Gable, Gary Cooper, and James Stewart smiling and elegant in front of a bar. 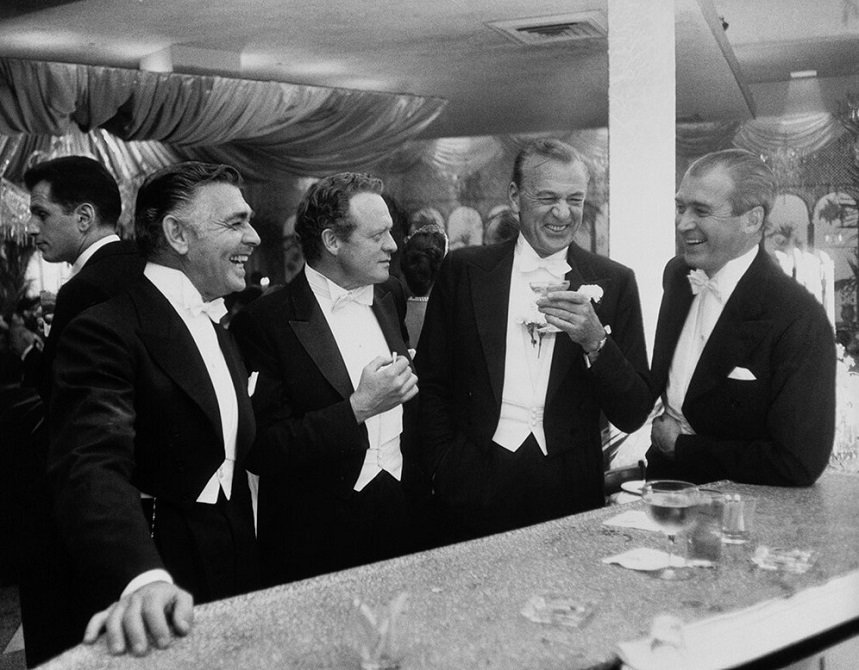 What is surprising is that, while photographing his subjects without ever resorting to a stylist and make-up artist, they are always perfect and cared for in every detail. As in his “Poolside Pairs” (1970), one of Slim Aarons’ most famous prints, in which model Helen Kaptur, Nelda Linsk and actress Lita Baron are portrayed in the Kaufmann Desert House in Palm Springs, California. 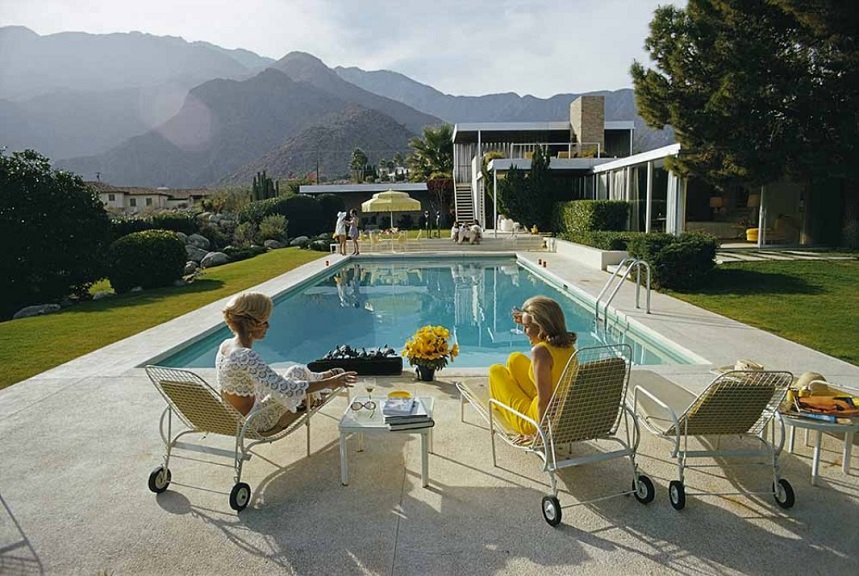 The image not only portrays very chic people in a dream villa around a swimming pool, but perfectly illustrates the philosophy of life of the American high society of those years. It is no coincidence that his most famous collection of photographs, which all professional life style photographers claim to have on their nightstand is titled “Wonderful Time: An Intimate Portrait of the Good Life”.

In another of Slim Aarons’ iconic photographs, “Penthouse Pool” (1061), we see a group of beautiful girls at the swimming pool of the Canellopoulos penthouse in Athens. In the background, in the distance, we see the ruins of the Acropolis. 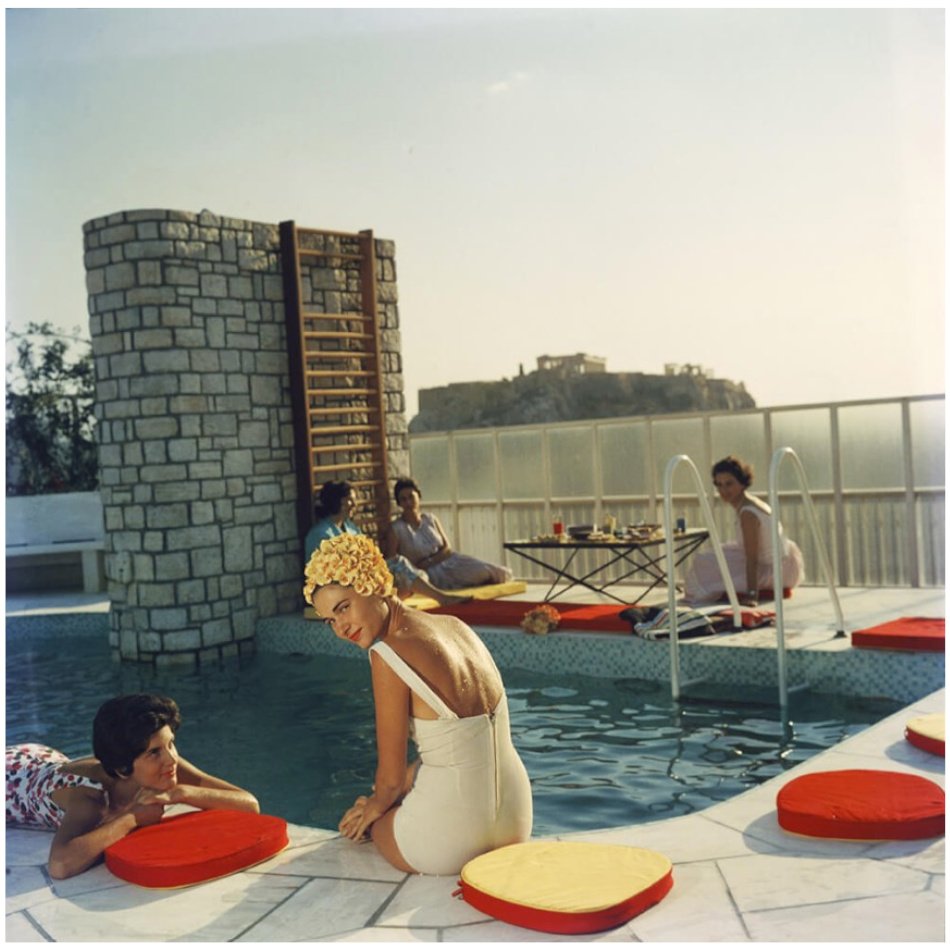 We therefore like to think of this famous artist who, according to those who knew him, did not like to take himself too seriously, as a person capable of giving harmony with his art even to the numerous contrasts of modern life. : artificial landscape and natural landscape, antiquity and modernity, light and shadow.

As in the photographic print “Pop and Society” (1968) in which we see singer Marianne Faithfull, the Honorable Desmond Guinness and Mick Jagger of the Rolling Stones sitting on a sofa under a large gilt-framed painting of a woman in a dress from the 18th century at Leixlip Castle, Ireland, home of Desmond Guinness. 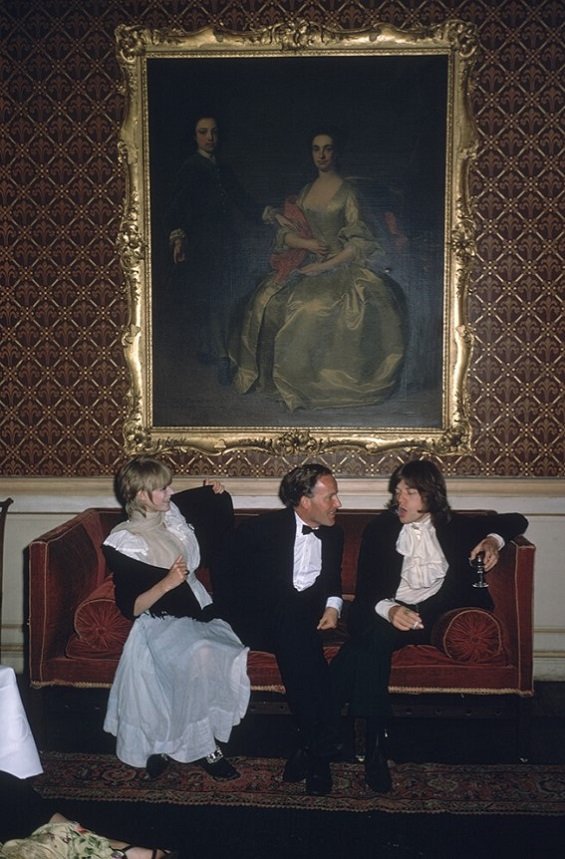 His greatness (and also the reason why the stars of the time competed to be photographed by him) lies above all in the fact that he always managed to capture the most intimate and less artificial aspects of the people portrayed in his camera, not for narcissistic reasons, but for the mere pleasure of telling their story. “He saw himself as a reporter. A photojournalist. A storyteller. “ declared his daughter Mary in an interview with Vanity Fair.

Who knows what he would think today, Slim Aarons is considered by many to be a precursor of lifestyle photography, therefore of the art of communicating the life of famous people, but in their ordinary everyday life, of altered and retouched images on Instagram and on Social to add, they take away from reality its deepest truth and beauty.

On the contrary, we like Slim Aarons’ photographs because they add harmony and beauty to the stories of places and people because they are captured and told as they are, in their bright and wonderful naturalness.