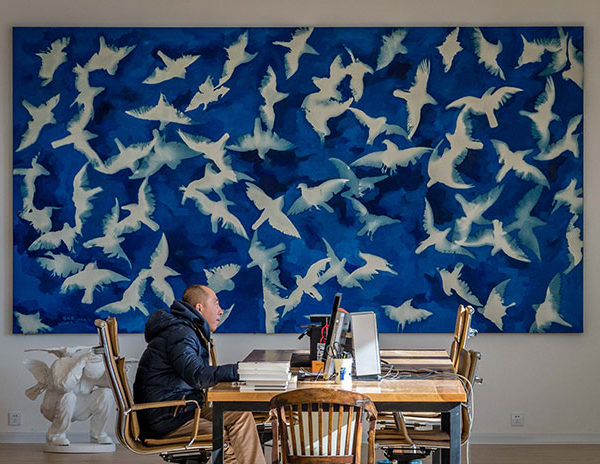 Zhang Dali is a contemporary Chinese artist known for his sculptures, graffiti, and paintings.
Born in 1963 in Harbin, China, he studied at the Central Academy of Fine Arts in Beijing, graduating in 1987. After protesting at Tiananmen Square and surviving the ensuing massacre in 1989, Zhang fled to Italy, where he first discovered graffiti as an art form of resistance. After returning to China, Zhang Dali was one of the only artist’s producing graffiti in Beijing during the 1990s, a practice he gave up in 2006. Since then, he has exhibited internationally and his works are held in the collections of The Museum of Modern Art in New York, the Smart Museum in Chicago, and the Brooklyn Museum, among others. Zhang currently lives and works in Beijing, China.

Zhang Dali works of art for sale: below you can find the artworks made by the Chinese artist Zhang Dali available at The Strip Gallery.

Unique works on canvas, cyanotypes, signed and accompanied by certificates of authenticity and origin.

Set of 5 works of art made with mixed media (cyanotype, ink and watercolor) on paper

Set of 5 works of art made with mixed media (cyanotype, ink and watercolor) on paper